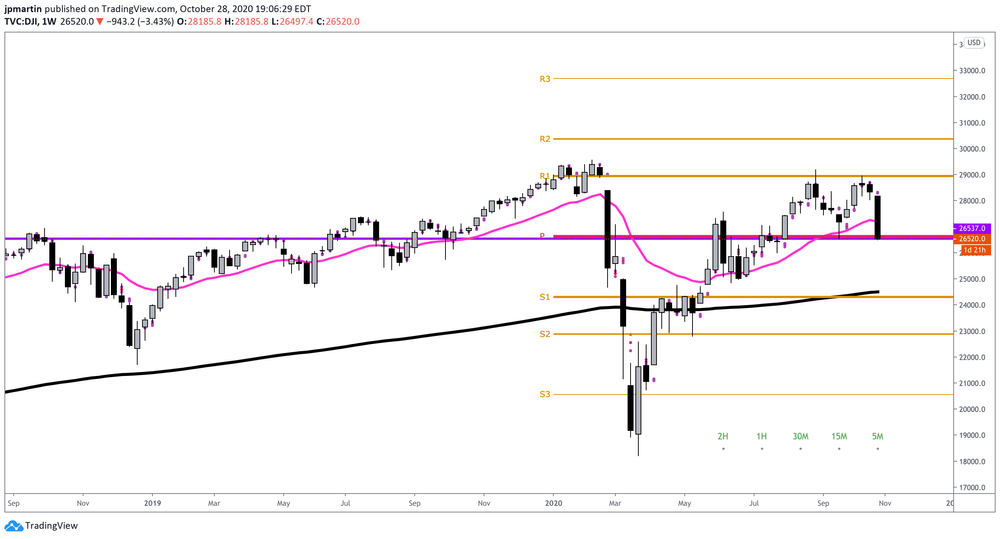 Yesterday, the Dow Jones fell by nearly 1,000 points. When was the last time you saw such four digit falls? Very recently?

If we go by just the charts, we have an interesting one now. Have a quick glance at the weekly chart below, and you'll notice two things:

So what's my conclusion? Well, as mentioned earlier we're at a crucial juncture. Just in time for the US elections. How will this affect Indian markets, well - the outcome of this election can affect all countries worldwide. Think of it as the Butterfly Effect.

Given that FIIs (Foreign Institutional Investors) are a big influence on the Indian markets, the direction will be dictated by their buying/selling - so just stay tuned for the week ahead.

I mentioned this before, while the markets having been moving up - the economy has not been shaping up too well. When will we go back to normal? I don't think we'll see that unless we see everyone NOT wearing masks in public. So long people are wearing masks, things are NOT going to be normal.

Side Note: If you haven't watched Scam 1992 - you MUST. Currently, as of 24 October, it is the highest rated Indian movie at 9+. It's available on SonyLiv - which you can also watch on your browser. It's the story of Harshad Mehta, and a fascinating one, produced by award winning Hansal Mehta (no relation I presume).

There is a similar instance in the movie going on today, markets going up, while the economy was going through a crisis. Some may attribute this to the fact, that there are no other better avenues to invest, and they may be right - but that may not be the only reason.

Tag: Investing, Trading
The link has been Copied to clipboard!

Does The TDOX Options Trading Strategy Work On Trending Days?