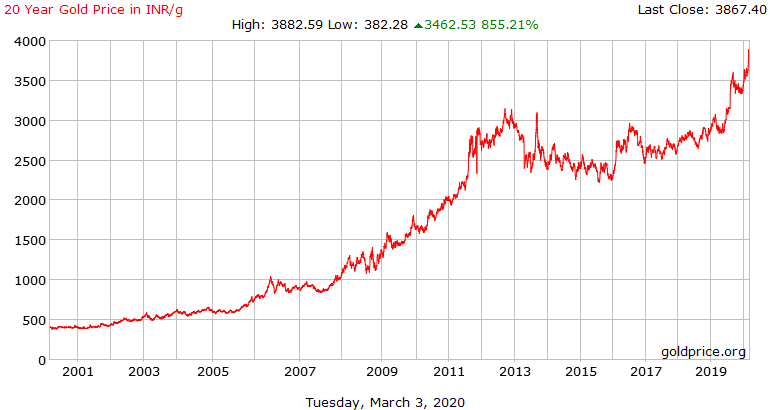 Has Gold Peaked? You might think so based on this chart...

It's all about perspectives. One of the things I learnt during trading and investing is to think in percentages, and think in relatives.

Things are not always as they seem. A simple example, is when you look at a daily chart, and you are in the forest, looking at the trees... you miss the big picture, until you see the weekly or monthly chart, and start to see the forest.

Non Resident Indians aka NRIs are natural foreign exchange experts. Always monitoring the price of their rupee against the country where they reside and work. This also explains why remittances alone to India amount to US$ 80 BILLION+ (And if you didn't know, the small coastal state of Kerala contributes to about 20% of that!)

But foreign exchange is not the only thing close to the Indians heart - so is gold, for centuries.

Currencies are always measured in US$ terms, and that is the problem. Not just with currencies, but with precious metals, and even commodities (or cryptocurrencies!). Let's assume that the centuries old standard of gold, the measure of the gods, is still a standard. Have a look at the following two graphs:

And when you see the above chart, you'd think that we haven't peaked in gold, yet. And you'd be right... until you saw this chart:

Now, if you step back and you're in India and looked only at the above chart in Indian Rupees, you'd say that we've actually crossed the previous peak and had gone way higher to record new highs. And you'd be right!

Why is that? Think for a minute?

This is the problem when you measure things only in US Dollars. You're in a bubble that you cannot fathom how other people around the world are living.

Being a Non Resident Indian (NRI), this would probably click faster for you. Now assuming the NRI didn't want to get caught "smuggling" gold into India, and wanted to be a good citizen and submit themselves to the tax terrorism of India - well, he'd have to pay not 10% on that price, but 12.5% now (thanks to the recent increase of Finance Minister Nirmala Seetharaman in 2019).

Now imagine if the price went down after you reached India?!  Wouldn't that be painful, because the customs doesn't give any refund when you import gold!

I used to be a gold bug, being an Indian – this is natural. But after listening to Martin Armstrong's take on gold, I guess I've changed my thoughts. When the facts change, do you?

The younger generation is buying less gold, and for a valid reason - they can't do much with it (especially when your governments make it exorbitant with taxes).

Their logic is that "when we're moving into the digital realm, why would you want to deal with a metal that limits you!" The younger generation are more comfortable with digital money, aka cryptocurrency if you like.

So that's what perspective and thinking relative is all about, I'll end this with these last famous words...

“Gold is money. Everything else is credit.”– J.P. Morgan

Tag: Trading, Investing
The link has been Copied to clipboard! Bitcoin gets punched, but is it knocked out?